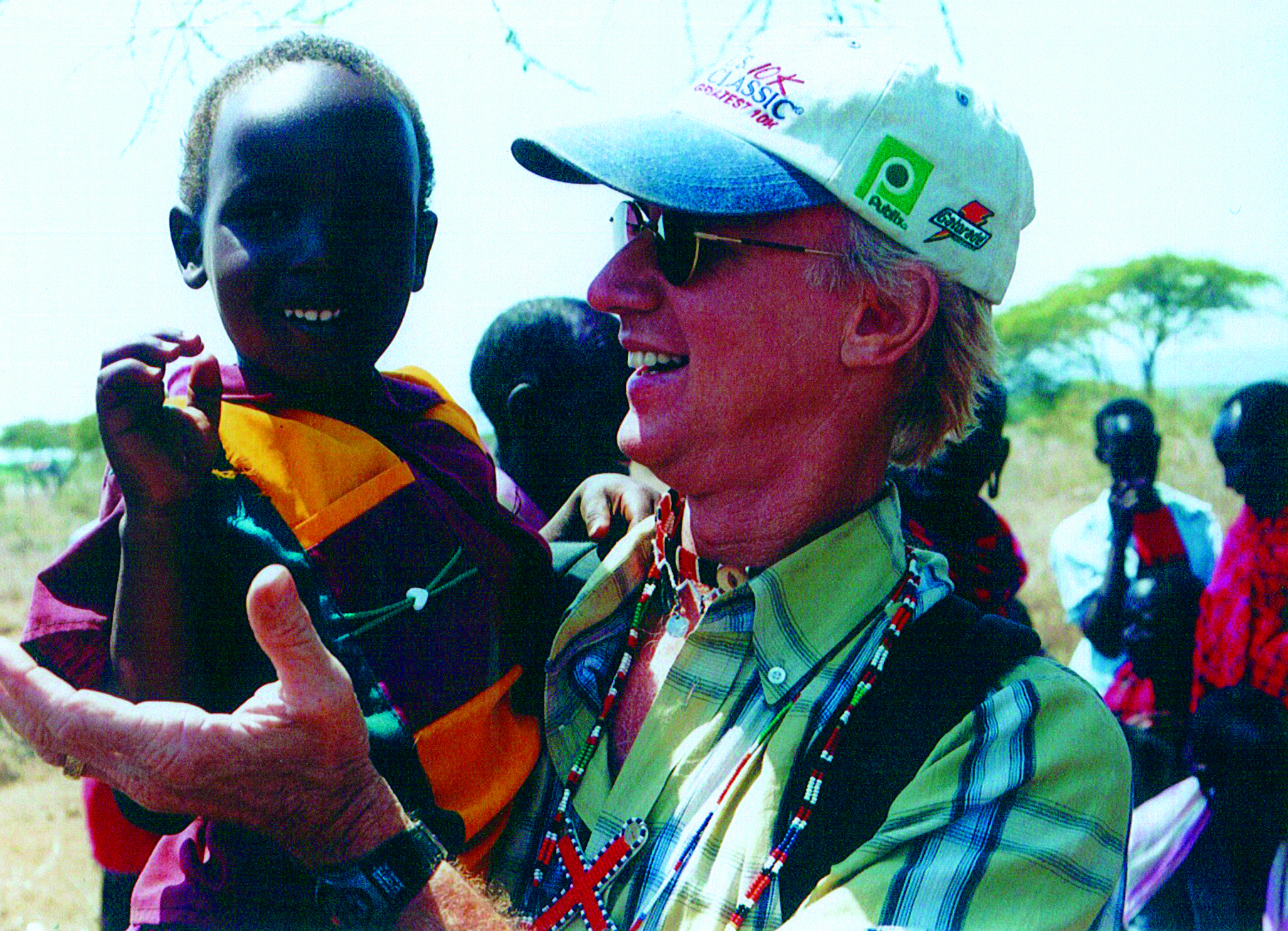 Donald H. Whitney has always had an entrepreneurial spirit. From his boyhood paper route to leading his cub scout troop in cookie sales, he has envisioned unique and innovative approaches to business and sales.

Don began teaching tennis at 16 and after college worked with Sports Illustrated as Director of Tennis with their high-profile Caribbean Rock Resort properties (i.e. Dorado and Cerromar Beach in Puerto Rico and Caneel Bay and Little Dix Bay in the U.S. Virgin Islands). Catering to the corporate CEO's and executives, Don wondered what the employees back home were doing, and how they were being motivated and rewarded.

In 1980, twenty-five years old, he made a stop in Atlanta, Georgia. This seemed to be the city that he felt he could settle in, begin a business, start a family, and make a difference in a community.

Throughout this time, since Don was 16, he also began a search in his heart for a way to help children. Touched by the ravages of hunger, poverty, and child abuse, and it's effects on children, he began supporting children through World Vision, Compassion International, Save the Children, WorldHelp and Christian Children's Fund, continually supporting and adding children through today, where he and his family visit and support 21 children worldwide.

In 1980, Don began a business called Corporate Sports Unlimited, to develop team-building events for executives and employees, starting with the "Battle of the Superstars" which he performed for companies nationwide. As the company grew, he expanded his role into corporate picnics, family festivals, tenant appreciation days and other event services, always building the camaraderie and fellowship with people, which he could bring to employees and management of businesses. The company, through Don's ability to develop relationships and venture into new areas, also began managing and developing corporate executive health clubs and spas.

In 1994, after 20 years in his heart of finding a way to help children, Don embarked on a new venture, a 501(c)(3) nonprofit organization called The United States (US) 10K Classic presented by Publix and Gatorade, a Labor Day run, walk, National inline skate championship, and Pro-cycling event that in 2010 drew over 16,000 participants from over 48 countries, 42 states and has over 60 corporations (national and international companies) involved.

Don's skills in sales, business management, employee motivation, sponsorship, and relationship building, along with his positive attitude, tremendous organizational skills, and unlimited energy allowed him to start this most successful event, while continuing to be President and CEO of Corporate Sports and growing this business.

Corporate Sports Unlimited was founded in 1980. Beginning this company was Don's way of fostering camaraderie, fellowship, and team building to employees of companies nationwide. Don created the company to fill a void, as he knew of no others doing this at the time. The company continued to grow and prosper in the next years. Growing into new offices and warehouse space every few years, the company expanded to meet other needs as they were found.

Corporate Sports began producing corporate picnics for employees along with other event services for corporations, including indoor games, meeting planning, grand openings, and other special events. Producing 300+ meetings and serving 2,000,000+ people annually, and taking care of groups from 100 to 30,000, while providing an excellent quality of service and attention to the smallest details became the company's forte. Don was primary salesperson and operations person for these events for many years of the company's growth. Don continually looked for new and creative aspects to these events. He has always been the leader in the industry, with the other companies often following his lead in new products and services. Beginning children's activities with Little Tikes children villages, innovative relay races, mascots, and more, these services became the industry standard within a few seasons of CSU's implementation.

Through Don's relationships and knowledge of fitness and sports, he also became involved in the design and development, build-out and management of fitness centers. After beginning the management of one club, he continued to design, develop and open many Ritz Carlton hotel spa/fitness centers throughout the country, and design, develop and manage local executive health clubs. Currently managing 21 clubs in the Atlanta area with a daily reach of 80,000+ members and clients including the World Headquarters of CNN, Cox Enterprises, Georgia-Pacific, Delta Air Lines, Carter’s, Mercedes-Benz USA, Insight Global, Jackson Healthcare and others, Corporate Sports is the only company of its kind to manage executive fitness centers along with team-building event services. The fitness center design, consulting management services began in 1983, years ahead of the myriad of companies who have entered outsourcing as their primary business. Corporate Sports introduced a personal training program within its executive clubs in 1995, which increased member service, club revenues and CSU revenues in its first year.

The U.S. 10K Classic presented by Publix and Gatorade (now named WE Series), a 501(c)(3) non-profit corporation, was started by Don and began in 1994. This event was created to bring awareness and funding to children (particularly in the areas of hunger and abuse). Starting as an idea while driving down U.S. 41, (Cobb Parkway) Don overcame tremendous obstacles by closing down a state highway and major thoroughfare, working with County Commissioners, Mayors, The Governor's Office and State DOT, bringing together a top class of world elite athletes, gaining sponsorship for a new event, and developing a Family Festival for the public which precedes this event. Don now spends a great portion of his time managing this 501(c)(3) non-profit event, for which The United States 10K Classic has donated over $5 million dollars to 30 local charities since 1995 to the not for profit community affecting children.

The company continues to fine-tune its procedures and systems, which is known for providing excellent quality of service (92% retention rate), attention to the finest details, and client satisfaction. The company's goals in the next five years is to be the finest design/development/management company for 40 executive health clubs in Atlanta, and increase event sales by 250% while continuing to provide the best quality of service for the best value.

Through the WE Event Series/The U.S. 10K Classic's Business to Business Program for sponsors, Don's goal is for sponsorship to be a winning venture with all companies involved, always exceeding a sponsor's expectations and connects businesses together allowing them to partner with one another for the common cause of helping children in need. The race has contributed $5M since its inception to 30 local children’s charities Don's next venture is to form the World Children's Foundation

The World Children's Foundation will partner with well-established, credible nonprofit organizations whose focus is serving homeless, orphaned, trafficked and/or neglected children in the U.S. and globally.

Don Whitney has created an environment within Corporate Sports different from many organizations. His values are centered around his deeply held Christian faith, his value on family, and respect for the individual. Don wants people to be and achieve their best, but keeping priorities such as family foremost. Don's integrity is an asset in his dealings and relationship building with clients, sponsors, employees, and the many vendors and public officials that he deals with. Corporate Sports has always given back as an organization, through corporate donations, fundraising for needy causes, and through providing events for many worthwhile organizations. Associates are encouraged to grow and develop, with Don's strong belief of promotion from within where possible. Associates often learn and work in different areas of the company, the clubs, events, and volunteering for The U. S. 10K Classic event.

The U. S. 10K and now the World Children's Center are the foremost social responsibilities of Don, his passion for the cause touches people every day, as he is very open with everyone on his beliefs and causes. He has touched many people; associates, clients, sponsors, vendors, and many others; many through his example have become more socially responsible and reexamined their values and belief systems. It is a great witness to the community to see a business, which is not afraid to call itself a Christian business, which has been blessed and continues to grow through ethical business practices. The contributions to children's charities from The United States 10K Classic has touched thousands of lives, and will continue to expand and grow.

Don models the behavior and emphasizes the importance of "doing well by doing good". He believes that each of us has a responsibility to leave this world a little better off than the way we found it. Don has used his experiences, relationships developed, and successful track record as a businessman to serve as a foundation on which he launched The U.S. 10K Classic presented by Publix and Gatorade and the World Children's Center.

Don has contributed thousands of hours to ensuring the success and continued growth of both 501(c)(3) nonprofits - personally contributing several million dollars. His passion is contagious and is modeled by the professionals who work in his private business who provide hundreds of volunteer hours and in-kind support annually to community efforts that support children and families in need.

Don has been or is a member of and is active in such organizations as: Society of Incentive Travel Executives, Meeting Planners International, Georgia Chamber of Commerce, Atlanta Chamber of Commerce, Cobb Chamber of Commerce, Atlanta Convention & Visitors Bureau, SHRM Atlanta (Society for Human Resource Management), and has served on the Board of Directors of Big Brothers Big Sisters (United Way), Junior Achievement, Special Olympics and presently is a Board Member of the U.S. 10K Classic and the World Children’s Center. He has been actively involved with Compassion International, World Vision, World Help, and the Christian Children's Fund since 1976. Don was honored by the Atlanta Chamber of Commerce and the Atlanta Business Chronicle as the "1995 Small Business Person of the Year" and was the finalist in the 2002 Business Division for Ernst & Young Entrepreneur of the Year for Georgia, Alabama and Tennessee. Don was named Citizen of the Year by the City of Smyrna, Georgia in 2010.